Colombiaʼs Golden Boot winner James Rodríguez Rubio – a joy to watch during Brasilʼs World Cup – was denied the right to play when Brasil and Colombia met in the quarter-final. Rodríguez was targeted as was Juan Guillermo Cuadrado and also Neymar in retaliation later. A match that should have been a mouthwatering tie was pockmarked by a tournament record 54 fouls.

Arguably the challenge that ended Neymar’s tournament would not have happened if control had been taken by the officials and maintained. This was a match that illustrated the need for the rules of the game to be respected and enforced. Without it matches like this descend into chaos.

Rodríguez and los Cafeteros lit up the World Cup previously with their delightful attacking play and infectious joy they were experiencing while playing. They were up to that point the only team to have won all their matches in that tournament in regulation time. They and football fans were robbed as their licence to entertain was revoked and cynical fouling and other cheating rewarded instead.

But Colombia bears responsibility too. In the first 20 minutes they outfouled Brasil, but the nature of those fouls was interesting. They were nowhere near as cynical or brutal as what followed. Brasil deserved their lead in that period, but their fouling even then was cynical and it was no coincidence that the main target throughout was Colombiaʼs star Rodriguez with the entertaining Cuadrado not far behind.

When asked about their World Cup experience Sevilla striker Carlos Bacca said “I am happy”. Despite their best performance ever in the World Cup Finals, this team was capable of more. They were genuine contenders. They did very well, but they were robbed of the chance to do even better. And football was the ultimate loser – cheated of a good example leading to success, just four years after the disgraceful exhibition in the World Cup Final of Africaʼs World Cup. 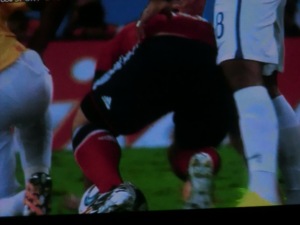 James Rodríguez was denied protection from referee Carlos Velasco Carballo, normally a strict no-nonsense official. Brasil flouted many rules, including distance on free kicks without consequence or sanction. Colombia naïvely largely observed them until they cottoned on to the fact that Rodríguez in particular had been targeted by a cynical Selecão, lacking Rodríguezʼ ability with few exceptions.

The ultimate insult was Rodríguez being booked for a tackle that bore no comparison to the hacks he had endured. David Luiz scored a fantastic goal from the resulting free-kick. Interestingly, Colombia had observed the rules on that free-kick. Their wall stood behind Velasco Carballoʼs white line and did not encroach.

Compare that to Brasilʼs conduct at a free-kick taken by Rodríguez in the first half. The free-kick – admittedly controversially given against Fernandinho over a 50-50 challenge with Victor Ibarbo Guerrero with both players potentially at fault. That decision went Colombiaʼs way, but once given the rules seemed to be discarded. 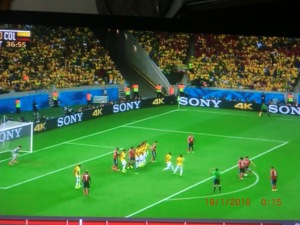 Note the position of officials as Rodríguez strikes the ball and those of the two defenders who had plainly rushed out of the wall long before it was taken. Even the line drawn by the referee was invisible as the wall had encroached anyway. Some payers never stood on the line, let alone behind it. The encroaching began as soon as the referee turned his back on Brasilʼs wall. 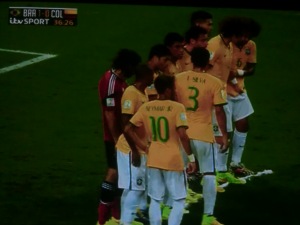 Nevertheless, it was obvious that there had been massive encroachment when it was taken. Both Velasco Carballo and his assistant referee cannot have failed to see it. So what were the consequences for this blatant cheating? Nothing. Not a yellow card – not even the free-kick being re-taken. Not even talking to. Play continued as if nothing had happened.

And it wasnʼt Brasilʼs first offence of that nature. Fernadinho had brought Rodríguez down near the half-way line previously. Rodríguez wanted to take the free-kick quickly, but was prevented from getting up by Fernadinho and more so Paulinho, who had to be pushed out from in front of Rodríguez.

The much-maligned Fred – less than a yard away – tried and failed to intercept it when it was taken. Ibarbo received it, but seeing the referee running towards him thought that Velasco Carballo had called play back. The result of such unsporting play? Brasil got possession and counter-attacked from it. All of this unsporting conduct took place under Velasco Carballoʼs nose. He did nothing. No card, no talking to, no warning – nothing. Small wonder it was repeated. 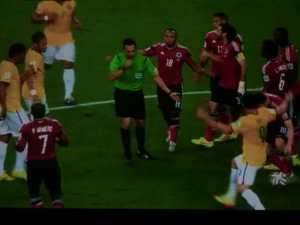 And then there was Thiago Silvaʼs shameful shove on Cuadrado with the ball yards away – unsporting conduct to put it mildly. The Brasilian captain should have been booked then with less than 40 minutes played. He was far from the only player to deserve a card by then. Worse was to follow – far worse.