Mauricio Pochettino was disappointed with the result after his Tottenham Hotspur team were held to 1-1 draw at White Hart Lane tonight by Fiorentina. Pochettinoʼs decision to rest the in-form Harry Kane backfired, despite Roberto Soldado Rilloʼs 6th minute strike – his first goal of the year. In the first half hour Spurs dominated, running Fiorentinaʼs back three ragged, but despite creating chances, the hosts failed to profit.

After 5 minutes Nacer Chadliʼs effort was saved at the expense of a corner. Paulinho took it finding Soldado. The former Valencia strikerʼs shot beat Romanian keeper Ciprian Tătăruşanu to give Spurs a platform they failed to capitalise on. Half chances at the other end were made by Joaquín Sánchez Rodríguez, resulting in a weak effort by Mario Gomez and for Mohamed Salah, on loan from Chelsea as part of the deal that took Juan Guilermo Cuadrado Bello the other way, but Federico Fazio blocked the Egyptianʼs shot. Despite the threat posed by the visitors, led by their captain Manuel Pasqual, but Spurs were more dangerous.

Christian Eriksen had almost converted a chance created by Chadliʼs excellent approach play, but shot just over. After his goal Soldado was profligate, but spectacular. Eriksenʼs cross found Soldado after Stefan Savićʼs block rebounded to him. Soldadoʼs bicycle kick was spectacular, but straight at the keeper from point blank range with the goal gaping.

With half an hour gone Fiorentina came into their own. Borja Valeroʼs cross field pass found Pasqual and Fiorentinaʼs captain set up Gomez. The former Vf Stuttgart and Beyern Munich strikerʼs effort went just wide. Two minutes later Salah slipped Gomez through, but recovering from a long injury lay-off Gomez had to settle for a corner.

That five minutes of pressure culminated in Soldado tripping Joaquín after the former Real Betis and Valencia winger had got past him. Soldado was rightly booked. Chilean international Matías Fernández Fernández took the free-kick. It was pushed out to his right by Hugo Lloris onto Savićʼs back and rebounded into path of José María Basanta, who took advantage of his good fortune to smash in the equaliser from close range.

Just before half time Spurs almost regained the lead. Kyle Walkerʼs cross was met by Soldado, whose header was saved by Tătăruşanu. Chadli latched on to the rebound. His shot was lashed onto the crossbar. Appeals for a goal were rightly turned down as the ball bounced on the wrong side of the goal-line. Vincenzo Montella changed his formation at half time and contained Tottenhamʼs threat, despite the introduction of Harry Kane.

“After 90 minutes we were better, we created more chances”, Pochettino said, “but it’s true that in the second half, in the last 15-20 minutes, we maybe didn’t create many chances. It’s a shame because at half-time maybe the team had deserved to score more than one goal and then it was 1-1. We have 90 minutes in Florence to try and win the game”. 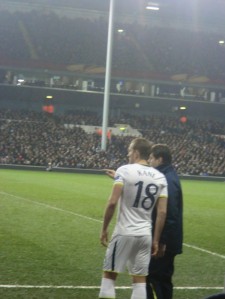 The decision to rest Harry Kane raised a few eyebrows, although it may indicate where Pochettinʼs priorities lie. At first he was vindicated by Soldadoʼs goal, but the equaliser and Montellaʼs changes in formation saw la Viola become a different proposition in the second half. Shortly after the restart Joaquín created space for himself on the right flank to tee up Salah. The Egyptianʼs curling shot from just outside the area went close with Lloris beaten.

Savić deserved his booking for hauling back Chadli after 5 minutes of the second half. With an hour play Spurs pressure was absorbed by Fiorentinaʼs defence. Andros Townsendʼs cross was headed clear by Savić to Nabil Bentaleb. The Algerian defenderʼs long range shot failed to trouble Tătăruşanu. Five minutes later Pochettino made a concession of sorts. Kane was introduced for the last 25 minutes, but despite his red hot form, not even a front two of Soldado and Kane could find a way past Tătăruşanu.

“We have a lot of games ahead, six in 17 days”, Pochettino said in defence of his decision to rest Kane. “It’s difficult. We need to rotate and give the possibility to play for all. It was a very open game. I think that we made a big effort in the first half, a great effort. I’m a little bit disappointed with the result because I thought we could have won.” 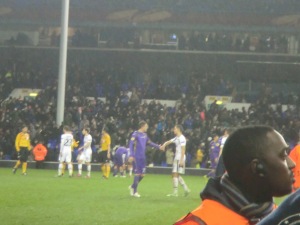